Do the right thing.

It’s a big week for Senator Claire McCaskill. Tomorrow, she will be meeting with Supreme Court nominee Judge Brett Kavanaugh.

On the vote, McCaskill recently said “I don’t believe there really is one side that is better than the other ‘politically.’ So in a way it’s kind of a blessing, it frees me up to do the right thing.”

So why then, is liberal New York Senator Kirsten Gillbrand tweeting this?: 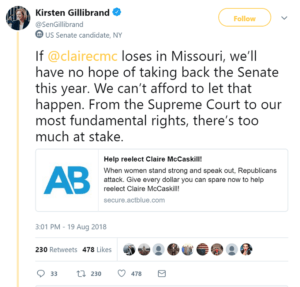 Sounds like she sees McCaskill as an ally who will support her own left-wing agenda.

After all, Gillibrand and Chuck Schumer have already vowed to do everything they can to oppose Judge Kavanaugh’s nomination.

Senator McCaskill: the right thing is to listen to your constituents, who voted for conservative judges when they backed President Trump, and support Judge Kavanaugh.