Josh Hawley on Fox & Friends: McCaskill Does Whatever Schumer Gives Her Permission To Do

Josh Hawley on Fox & Friends: McCaskill Does Whatever Schumer Gives Her Permission To Do

COLUMBIA, Mo. – Missouri Attorney General Josh Hawley sat down with Brian Kilmeade of “Fox & Friends” this morning to talk about his race for U.S. Senate. He spoke out about Senator Claire McCaskill’s lack of independence on issues like the nomination of Judge Brett Kavanaugh, explaining “Missouri’s Senator should not be asking party bosses for permission to do anything, let alone meet with a Supreme Court nominee.” 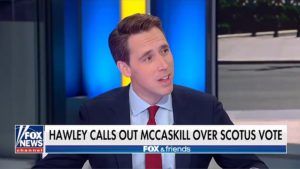 Full transcript from the interview:

Kilmeade: Senator Claire McCaskill, over to the left, is one of the ten red-state Democrats seeking re-election. And she’s one of just three to meet with Supreme Court nominee Brett Kavanaugh. Did she indeed have a choice? Even after her meeting yesterday, McCaskill says she is still undecided. But our next guest is calling her out, saying it’s not a hard decision. Josh Hawley is the Missouri Attorney General and the Republican Senate candidate opposite Claire McCaskill in a real horserace now for that seat. Welcome, Josh.

Hawley: Thanks for having me.

Kilmeade: You don’t think it’s a hard decision. Brett Kavanaugh, you should think should be a layup.

Hawley: Yeah, absolutely. Look, this is a state, Missouri, that voted for President Trump by 20 points – conservative judges, a big part of that. When you think what’s on the line at the Supreme Court, Brian – immigration, the Second Amendment, religious liberty. This is not a hard decision. Brett Kavanaugh, imminently qualified. 300 opinions, affirmed by the Supreme Court 11 times. Claire McCaskill ought to quit hiding, come out right now and say she’s gonna support him. And then stand up to her party and challenge them to support him also. That would be leadership.

Kilmeade: There’s a lot of things that happened with the last Supreme Court nominee, Gorsuch, where a lot of red-state Democrats voted because it was already safe. He was already going to get in anyway, they only needed a simple majority. So, would you be on the lookout for that? A symbolic support?

Hawley: Well you know, here’s what Claire McCaskill tends to do: whatever Chuck Schumer gives her permission to do. She had to get permission from Schumer to even sit down with Kavanaugh. But Missouri’s Senator should not be asking party bosses for permission to do anything, let alone meet with a Supreme Court nominee.

Kilmeade: Mollie Tibbetts in Iowa, not Missouri, but was jogging, she ends up dead. It turns out illegal immigrant Cristhian Rivera killed her – blacked out on the actual incident. I’m not buying that, I’m sure you’re not buying that.

Kilmeade: What is your thought about people saying the President is politicizing this effort because it backs up his theory and his beliefs on illegal immigration?

Kilmeade: Well, in particular, the President’s also talking about building a wall. He’s expecting $5 billion more dollars. It might get stopped in the Senate if it gets through the House. What’s your reaction?

Hawley: Hey, we’ve got to build the wall. And the fact that Claire McCaskill won’t vote for funding for that wall, the fact she will not support actually enforcing our laws at the border – another reason she’s got to go.

Kilmeade: The President helped you at all?

Hawley: Oh, hugely. He’s been in the state several times. We hope he’ll be back soon. It’s great to have his support.

Kilmeade: Josh Hawley, this is by far – I think everyone agrees – the toughest opponent Claire McCaskill ever had, and it’s going to be a dog fight until the end. Thanks so much. And by the way, we reached out to Senator McCaskill. We did not hear back, and we do have voicemail so we’ll check it again.