“Women and men across Missouri should be appalled by the disgusting lies being pushed by Claire McCaskill’s dark money allies. Attorney General Hawley is proud to have made stopping human trafficking a priority in Missouri, including leading the largest raid in state history. Senator McCaskill is behind in the polls and her history of brutal campaign tricks proves her team will do whatever it takes, even lie, in a last-ditch effort to save her seat for the Democrats. She should do what’s right and condemn Chuck Schumer’s attacks immediately.”

AG Hawley Launched A New Anti-Trafficking Task Force And Regulations To Fight Human Trafficking. “Missouri Attorney General Josh Hawley is going on offense when it comes to human trafficking in Missouri following the launch of his new anti-trafficking task force and regulations on Monday. The regulations which will fall under Missouri’s consumer protection laws, will prohibit the use of businesses as ‘fronts’ for trafficking, make debt bondage illegal and provide for new civil and criminal penalties on traffickers.” (KOMU-TV, 4/3/17)

AG Hawley Went After The Online Advertiser Backpage For Promoting Human Trafficking. “Missouri Attorney General Josh Hawley has begun the process of investigating the online advertising website Backpage, using a new unit in his office tasked with prosecuting human traffickers under the state’s consumer protection laws. Hawley told the Post-Dispatch on Tuesday that evidence already points to Backpage and its affiliates knowingly participating in illegal trafficking activity and concealing it…” (St. Louis Post-Dispatch, 5/9/17)

AG Hawley Partnered With Missouri Businesses To Clamp Down On Human Trafficking. “The Missouri business community is taking a stand against human trafficking. On Sept. 26, Missouri Attorney General Josh Hawley and the Missouri Chamber of Commerce and Industry announced the formation of a new business council to help educate companies about this problem and empower them to take action.” (Missouri Chamber Of Commerce And Industry)

FACT: Josh Hawley Reiterated His Support For Contraception In January 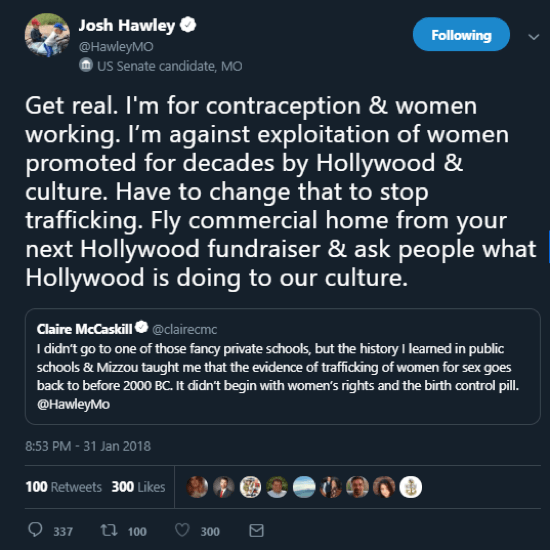 VIDEO: Attorney General Hawley’s Full Remarks. “Let me briefly mention one other major area, one of the major sources of challenge I think that we are facing, and this is the effects in our society of the so-called sexual revolution. You know what I’m talking about, the 1960s, 1970s, it became commonplace in our culture among our cultural elites, Hollywood, and the media, to talk about, to denigrate the biblical truth about husband and wife, man and woman. To denigrate the biblical teaching about the sanctity of marriage and the sanctity of family, the sanctity of children and the appropriate place for sexual practice and expression within the family, within marriage, and we’re living now with the terrible after-effects of this so-called revolution, which was in fact I think a great step back. And one of them is, one of those effects is a crisis in our country that goes by the name of human trafficking. Human trafficking, and more in particular trafficking in sexual labor, do you know there are thousands, and thousands, and thousands of Americans, almost all women, 97% women, who are coerced or defrauded or forced into commercial sexual exploitation in our country and moved across state lines and bought and sold as if they were animals. It is happening all over our country, it is happening here in the state of Missouri. Several months ago I was privileged to lead the largest anti-trafficking raid in Missouri’s history. We served 18 warrants, on 18 different locations in southwest Missouri, in the Springfield area, we shut down 13 business that were acting as fronts for human trafficking. We uncovered a trafficking ring that stretches all the way back to East Asia and Asian organized crime. I met young women who could not even speak English, who had been taken from their homes in China and elsewhere, brought through California and to our state, from our state were being sent out to states in the south. It’s unbelievable. You have to see it to believe it. It’s happening here. It’s happening in Missouri, it’s happening in this city. It’s happening everywhere. Why is it happening? Well partly because the criminals are not getting the penalties they deserve. The criminals don’t live in fear of the law like they should and I’m telling you I’m working day and night to see that that changes. There’s another reason and the simple sad and terrible truth is we have a human trafficking crisis in our state and in this city and in our country because people are willing to purchase women, young women, and treat them like commodities. There is a market for it. Why is there? Because our culture has completely lost its way. The sexual revolution has led to exploitation of women on a scale that we would never have imagined, never have imagined. And brothers and sisters in Christ, this is a crisis toward which we must run; this is a place where our witness is most needed. We must both seek to hold accountable those who perpetrate this terrible crime. We must seek to help the victims of this crime to recover, to find new life, to find healing, and wholeness, and a new start. But we must also deliver a message to our culture that the false gospel of anything goes ends in this road of slavery. It ends in the slavery and the exploitation of the most vulnerable Among us. It ends in the slavery and exploitation of young women. It will destroy our families. It will destroy our communities if we do not take a stand and say not here, not here. And this too is a fight for the character of our society. It comes down to a question of what kind of a country are we going to be. And you and I know, you and I know the antidote to the cultural darkness that we are facing. There is no more dignifying message on the face of the earth than the gospel of Jesus Christ. If you want to protect the equality of women, preach the gospel of Jesus Christ. If you want to protect the liberty of all people, preach the gospel of Jesus Christ. You want to see society transformed and true liberty and opportunity spread, preach the gospel of Jesus Christ. It is time to take that gospel anew to this place of great and tremendous need and so I ask you on those score also, I ask you to help your congregations understand this isn’t just a theory. Trafficking isn’t a thing that happens somewhere else. It happens here. It’s happening in your hometown. I promise you this—believe me—I’ve seen the statistics, I can’t tell you about all the investigations we have underway, believe me if you live in the state of Missouri, it’s happening. In a community near you.”